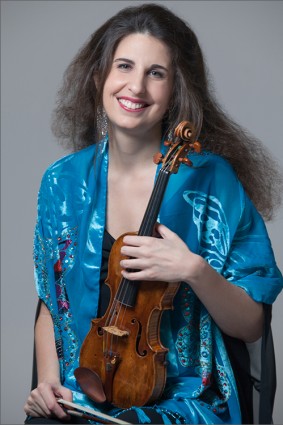 International concert performer, Laurence Kayaleh is an artist of deep musical insight, possessing a rich, singing tone and a natural feeling for style. Possessing the impeccable technique and innate musicality of the grand tradition of violin playing, while at the same time venturing regularly into contemporary music, her playing comprises all the facets of a complete musician and creates an intensely moving experience for the public.

Having accomplished her artistic training in the Stage Performance Classes of the prestigious Kayaleh Violin Academy in Switzerland (Performer Diploma), she won First Prize with distinction at the Swiss Competition for Young Soloists, and was awarded the Grand Prize by unanimous decision of the Jury at the Stresa International Competition, Italy.

At her Paris debut at the Théâtre du Châtelet, the world-renowned critic of Le Figaro, Pierre Petit, described her playing as regal, praising her wonderful sound and her innate sense of phrasing. Following this event, she performed at the Gaveau Hall in Paris, has been a guest of the Lucerne Festival, and played as soloist under such well-known conductors as Pavel Kogan, John Carewe and Hiroshi Wakazugi.

She performed in the USA, in Toronto, Canada, as soloist with the Orchestra Stabile di Bergamo at the Donizetti Theater in Bergamo, Italy, with the Mexico City Philharmonic at the Cervantino International Music festival in Guanajuato and in Mexico City playing Beethoven’s Violin Concerto, for Radio-Canada, as well as concerts throughout Canada, in Dublin, Ireland, and at the Tonhalle in Zurich. Other engagements include 20th-century chamber music concerts at Montreal’s Canadian Center for Architecture, recitals in Messina, Sicily, recordings for the CBC-Series (Canada), and for the Swiss, French, Belgium and Russian radios/televisions, concerts in the Ottawa International Chamber Music Festival and a Gala Concert in Switzerland that she shared with violinists Viktor Pikayzen and Ida Haendel.

Upcoming events will take place in Canada and in Europe. Ms. Kayaleh is also invited to be a member of jury in Canadian and international music competitions and she is regularly invited to give Masterclasses in Canadian universities and in institutions in South America and in Europe, including festivals.

In 1996, Laurence was granted the Nyon City Artistic Award, Switzerland.

Laurence Kayaleh’s repertoire covers the works written for the violin. She performs on a magnificent Pietro Guarneri built by the Venetian master in 1742, which belonged to the eminent violinist and pedagogue, Carl Flesch. With her lovely bearing and commanding stage presence, Laurence’s violin speaks to the audience in an extremely personal and unforgettable way. 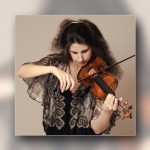