The Sound of Medtner 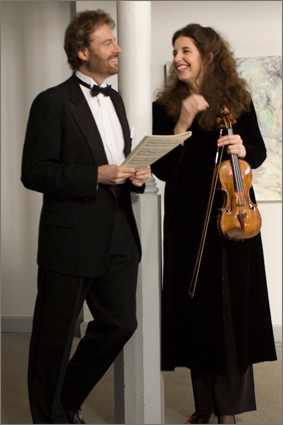 It all started with a casual conversation on a subway platform following a rehearsal in 2002. “Have you ever heard of Nikolay Medtner?” Canadian pianist Paul Stewart asked Laurence Kayaleh. Stewart, who had been searching for the right violinist to play the Medtner violin sonatas for some time, lovingly took out the well-worn photocopies of the sonatas and offered them to the Swiss-born violinist to take home. “I was immediately thunderstruck and I became addicted to them,” exclaimed Kayaleh. This brief exchange has blossomed into a collaboration that has now culminated in the release of a two-CD set of Medtner’s complete violin and piano works on the Naxos label.

For Stewart, discovering Nikolay Medtner had practically become an obsession after encountering the composer’s works as a student in London. “My teacher had known Medtner and he let me see some scores,” Stewart explains. Tracking down the printed music has been a journey through the years taking him from England to India to New York. The trouble was that although the composer’s complete works were published in the 1960s in Russia, few libraries had all 12 volumes, and only recently have there been recordings available.

Most musicians and music fans would be hard-pressed to identify the name Nikolay Medtner (b. Jan. 5, 1880 – d. Nov. 13, 1951), who was a younger contemporary of Rachmaninoff and Scriabin. Born in Moscow and the youngest of five children, Medtner studied piano with his mother until age ten, when he entered the Moscow Conservatory, from which he graduated in 1900. Besides piano technique, Medtner studied composition from Sergei Taneyev. “Medtner’s skill as a piano virtuoso was considered second only to Rachmaninoff’s and he was known for being a specialist in the Beethoven Fourth Piano Concerto and the Appassionata sonata, but he only played his own music,” Stewart said. To the consternation of his family, Medtner soon turned exclusively to composing.

Medtner’s musical language was based on the Romantic era. “He was c>lled the Russian Brahms and his style really was formed by the time he was 20,” Stewart said. Medtner had a series of successful compositions for piano in the first 10 years of composing. “Rachmaninoff considered him the greatest composer of their time and dedicated his Fourth Piano Concerto to him. What makes him so unknown today was simply bad timing.” When the Russian Revolution broke out in October 1917, Rachmaninoff left early but Medtner stayed. For many years, Medtner had been in love with Anna Mikhaylovna Bratenskaya, a violinist and the young wife of his older brother Emil. With Emil’s blessing, Medtner waited until his parents had died and his brother had divorced before marrying Anna in 1918. “Medtner was a man of high principles and morals,” said Stewart. “There would not have been any sexual liaison between Medtner and Anna before their marriage.” The couple was able to leave Russia only in 1921 and with the exception of a tour in 1927, was never to return. Unfortunately, musical tastes had turned away from the Romantic era by then, and Medtner was considered to be from the old school.

Although Rachmaninoff secured a tour of North America in 1924 for Medtner, who played his own works exclusively, Medtner never took to touring and giving concerts; he eventually settled in London to a life of teaching, playing and composing. He was very outspoken against modern music and in 1935 published the treatise The Muse and The Fashion, a defence of the foundation of the Art of Music. “He couldn’t bear Richard Strauss and he criticized people too often,” said Stewart. “When the Second World War came, his music was forgotten.” His German publishers disappeared and not only did his income dry up, but his music was no longer available.

Medtner’s fortunes seemed to pick up following the difficult war years when, in 1946, the Maharaja of Mysore (southern India) became a patron to Medtner. In 1949, the Maharaja founded a Medtner Society in London to record all of Medtner’s works. Despite his failing health, Medtner recorded his three piano concertos, as well as his sonatas, chamber music, numerous songs and shorter works. “The bad luck was that the recordings were issued in 78s and by the 1950s the 78 was on its way out and those recordings became difficult to find,” said Stewart. The composer died in London in 1951 and is buried with his brother Emil in Hendon. Anna returned to Russia with all his manuscripts and scores, and the completed works – which are still hard to find – were published in Russia in the 1960s.

Medtner’s works are in the grand old tradition. According to some sources, he considered himself a descendant of Beethoven. For Medtner, sound is essential to his compositions. For Paul Stewart, sound has always been primary to his piano playing. Growing up in Nova Scotia with a father who sang and conducted a choir, Stewart started playing the piano at age 5. The intrepid young pianist accompanied his father and the choir and also played the organ. He then studied at McGill under Hungarian professor Charles Reiner. “I had an old-school training, where sound and tone production were the optimum aspiration for a pianist, not so much fast playing,” said Stewart. “From Charles, it was always sound and sound. It’s a matter of learning to play the instrument the way it was constructed. It’s important to know how a string vibrates. You have to learn how to manipulate the speed at which the hammer hits the string because that’s the secret. If the string doesn’t vibrate with the overtones, the sound is going to be harsh or at best uninteresting. There is a lot more to playing piano, of course, but nothing works unless it is musical.”

From McGill, Stewart went on to more studies in the European tradition, with Kendall Taylor in London and Arturo Benedetti Michelangeli in Italy. “I was lucky to have heard Horowitz and Rubinstein live,” said Stewart. “Medtner is extremely rich music, and it needs an artist who understands sound. I’m lucky to find this in Laurence Kayaleh.”

For the 33-year-old Kayaleh, the daughter of musicians (her mother is a pianist and her father a violinist) who run the Kayaleh Violin Academy in Switzerland, the individual characteristics of great violinists such as David Oistrakh and Yehudi Menuhin have always fascinated her. “I always try to have a speaking sound that is telling something, saying something particular, what I feel and what I want to express in the music,” Kayaleh said. “Sound is a great language for the moods. I try to have as many colours as possible. My aim is always to have a beautiful sound. You give the character of the piece, but always with a very well rounded sound.” What is the secret of making a nice sound on the violin? “You have to have a lot of horizontality in the bow, which will give a lot of natural vibrations in the string. If you put more pressure, the vibration of the string is actually less. The left hand is vibrato. Be very precise in the intonation so that you can get all the harmonics of the notes. It’s many hours of work, even without vibrato to get the feel the bow. Work quick passages slowly. Play fast with the impression of calm. You feel every note and the sound will develop.” Kayaleh had known Medtner as a great piano composer, and was very happy to have discovered the violin pieces. “I am interested in beautiful works that are not often played,” she said.

Discussing Medtner with both Stewart and Kayaleh is much like hearing a Medtner violin sonata: both voices are equal and support each other. “Sometimes I’m the soloist and other times, I’m the accompanist,” said Kayaleh. “Medtner had a natural gift for structure; he was born with the sonata form,” said Stewart. “His compositions are so polyphonic and contrapuntal. It’s so dense with melodic material. He has unusual control over melodic material which develop and fit on top of each other. You discover that the second theme is the first theme upside down.” Stewart tells us that Medtner is quite the intellectual composer. “He composed like a jewelrymaker; every single note had a purpose or destiny.” Medtner’s scores are full of indications which Stewart calls the script. “Every word on atmosphere has a purpose,” said Stewart. “Initially, the bow markings didn’t make sense but as I played the piece more, it was so logical,” said Kayaleh. “Sometimes, you wonder why a legato line is marked to be played with only a thumb,” said Stewart. “I tried it and it’s the only way to do it. Liszt also did that.” Stewart relates how he used Medtner’s recordings to help guide the interpretation. “Medtner was always on the metronome markings and he always kept to the pulse. Following his markings gives you more freedom.” Kayaleh continues, “There’s freedom between the beats. There is real tempo rubato. For Chopin, it’s the same.”

What should the public be listening for? “You have to keep an open mind and put in some effort,” said Stewart. “Listen to the tempo, and prepare to be transported by the music,” said Kayaleh. “The denseness makes it complicated, but Medtner is extremely melodic,” continued Stewart. “It’ll grab you the second or third time. Treasures have to be dug for.”

Naxos will be releasing the second volume (cat. no. 8.570299) of Laurence Kayaleh and Paul Stewart’s version of the Medtner works for violin and piano on March 25, 2008. This CD includes Medtner’s Violin Sonata # 1 and #2. The first volume was released in December 2007 and contained the Violin Sonata # 3. 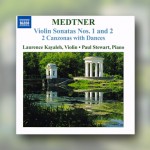